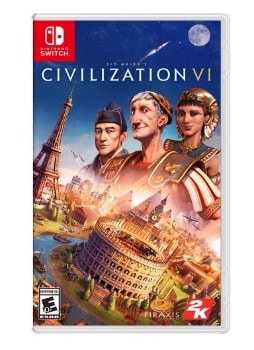 For a limited time, you can buy the Sid Meier's: Civilization VI Switch Game for only $9.99 (21% off). Get FREE Super Saver shipping on orders of $25 or more (or with Amazon Prime).  If you prefer, you can also order this game for the same price from Best Buy with FREE in-store pickup (where available).

We bought this game for my older son a couple of years ago for Christmas, and it's still his favorite game to play.

Whether it's at home, on the road, or wherever else you play, make your mark on history with Sid Meier's Civilization VI on Nintendo Switch. Explore the world, advance your culture, wage war, and make peace as you compete against history's most renowned leaders to build an empire that will stand the test of time.

Originally created by legendary game designer Sid Meier, Civilization is a turn-based strategy game in which you attempt to build an empire to stand the test of time. Explore a new land, research technology, conquer your enemies, and go head-to-head with history's most renowned leaders as you attempt to build the greatest civilization the world has ever known.