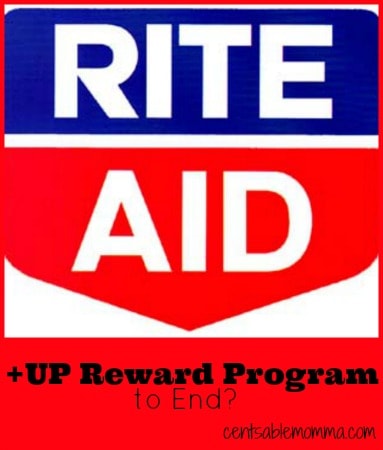 Update: Rite Aid has announced that it has joined with several retailers in a new cross-retailer loyalty program called Plenti.  Retailers included in the program are Exxon/Mobil, Macy's, AT&T, Nationwide, Rite Aid, Hulu, and Direct Energy.  They hope to add additional retailers soon.

There have been rumors swirling around this week about Rite Aid discontinuing their +UP Reward program and replacing it with a points program.  While they have not verified it, other than stating on their Facebook page that they  "will continue to provide great opportunities for you to save on the everyday products that you purchase.", the upcoming 3/29 Rite Aid ad preview does not include any +UP Rewards in the ad nor any mention of a new program.

I did a quick online chat with a Rite Aid customer service rep to see if anything had changed since the Facebook post, which you can see below:

As you can, Rite Aid is not announcing anything at this time, and they've obviously given a standard reply to customer service until they are ready to make an announcement.  I will update you when I hear anything officially about changes at Rite Aid.

I'm going to miss the +UP Reward program since Rite Aid has had some good deals throughout the years.  However, back when Rite Aid discontinued the SCR (Single Check Rebate) program, I was sad that was going to go also, and the replacement +UP Reward program worked well.

So, hopefully Rite Aid will roll out a new program that will work well to help us save money at their store.  I just wish they would have continued the +UP Reward program until they were ready to announce a new plan.

I'm not convinced that after years of shopping at the drugstores with loyalty rewards programs that regular deal customers will want to continue shopping at Rite Aid without some sort of loyalty program rather than just "good" sales.

Be sure to check out the current Rite Aid deals complete with coupon matchups.