Home » Save Money » Tips and Tricks 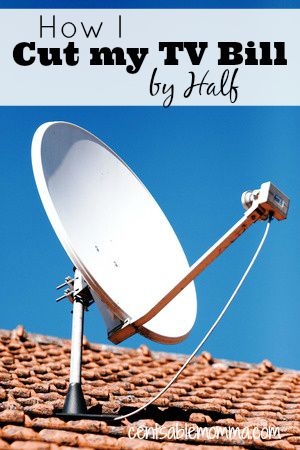 How would you like to save $480 a year just by making a 30 minute phone call?  I know I would since I'm always looking for tips and tricks to save money!  Well, I was able to cut our DishTV bill by $40 a month earlier this week just by making a simple call.

Let me back up a bit... We live in a rural suburb of a big city - which means that we struggle to get good internet and we don't have great TV reception with an indoor TV antenna (since we live 43 miles from the transmitters).  Recently, I finally found a good wireless internet option for us and we can finally stream video on our TV which was great since we planned to cut paid TV altogether (like we did in Michigan) by using a mix of over-the-air TV (using an antenna), Netflix, HuluPlus, and SlingTV (for sports during the football and basketball seasons) streamed with our Fire TV Stick

Using those three TV options was going to cost us $36 a month plus tax ($7.99 each for Netflix and Hulu Plus, and $20 for SlingTV), and we were paying about $80 per month with our satellite provider (since our special contract pricing had ended).  We don't have the option of cable TV or Fios or UVerse, and I didn't want to add yet another satellite dish to the roof of our house (in order to get the competitor's promotional pricing), so I was going to cut paid TV out completely (except for internet options).

So, I called DishTV to cancel my service.  They immediately asked why I was cancelling, and I explained about using streaming options to save money.  She asked me how much I was planning on spending each month, and if I would be willing to stay with them if they could match it.  I said I'd think about it.  The customer service rep asked which stations we watched and reduced our package a bit from the 120 stations we had.  We really only watch the local stations and about 6 other stations since we don't watch much TV.  Plus, she offered a $30 credit for 3 months.

I decided I didn't feel like dealing with calling to cancel again in 3 months, so I said that I still wanted to cancel.  Then, the rep offered a $30 credit for 8 months with no contract.  I decided to go for it, since I like having a DVR, and now we don't have to deal with trying to get TV reception with the antenna.

So how do you reduce YOUR TV bill?

If your contract is finished, make a plan for alternative sources for TV and figure out how much you would spend on the alternative.  Then, call your provider to cancel.  Likely your provider will try to work with you can keep you as a customer.  But, be prepared to actually cancel your service or continue to negotiate past the initial offer.

I had heard this advice before, but it was important to me to really be prepared to cancel.  In fact, I almost still did, since I like the flexibility of streaming TV.  However, although our internet is decent, it's still not completely reliable which makes satellite TV more appealing.  I also made sure that I had a real plan for how much I was going to spend on the alternative, so I wasn't making up a number when I was negotiating.

Have you tried negotiating the price of your paid TV?  How did it work for you?