Save Money » Tips and Tricks » Cut Cable to Cut Costs 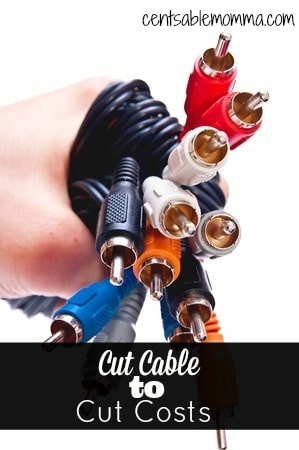 Cable TV can be really expensive! In our area, it costs $40+ per month to have the standard cable package. Add digital cable, a DVR, HDTV, and it could very likely cost over $100 a month for TV.

Years ago, although we lived in a suburb of a fairly large city, our analog TV reception was not very good. We could get ABC very well, but forget Fox or CBS (which made it very frustrating to watch pro football). So, we decided to add basic cable, which was basically just the normal free broadcast stations, plus a few extras like the weather channel and QVC.

It was pretty inexpensive when we signed up (about $11 per month). However, the cable company had increased the prices so much over the years, that we were up to $17.50 per month (for free broadcast TV, mind you!).

Ever since the digital transition, we discovered that we can get great TV reception on our HDTV and our regular TV using a digital converter.  Channels come in crystal clear, and we get multiple stations (for example, we get 3 PBS stations). So, we made the decision to cut the basic cable and just use our antennas.  We haven't looked back since!

If the network stations don't cut it for you, you can always supplement with Netflix (which still works out cheaper than cable) or Amazon Prime, if you're looking for something additional to watch.

The biggest complaint I've heard (and had myself) was the lack of ESPN with rabbit ears.  Well, there's a new service called Sling TV, where you can pay $20 a month and get ESPN streaming live using your internet (and a streaming device like Kindle Fire, etc).  Plus, you may be able to get ESPN 360 on your computer depending on your internet provider.  We got it when we had AT&T UVerse for our internet.

If you are paying more than you like for cable TV, then borrow someone's rabbit ears and see if it works in your area. Maybe you can save on this monthly expense too.

What about you?  Do you pay for TV service or have you found some creative ways to do without?