Since my family lives pretty far away from me, we ended up spending Thanksgiving with some neighbors. The best part about a joint Thanksgiving dinner - we get to share making all the food. I ended up bringing a Costco ham, Dutch Green Beans, corn, and a Chocolate Cheesecake.

Of course since we had so much food for only 10 people, I had lots of leftovers. Since I made the ham, that meant that I needed to find something to do with it. There are only so many ham sandwiches you can make with the leftovers! 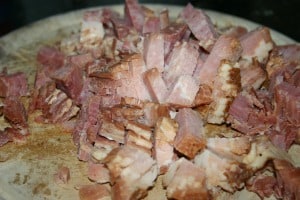 I decided to use the ham in my Dutch Split Pea Soup recipe. Normally, I buy pre-diced ham, but this was so much better!

Place peas and 10 cups of water or broth in a large pot.  Cover and simmer on med-low for 1 ½ hours.  Add the chopped leeks, carrots, potatoes, and spices and cook covered for 2 more hours.  Dissolve the Leek Soup Mix in 1 cup of cold water and add to the soup along with the ham chunks.  Let it simmer for an additional 10 minutes and serve!