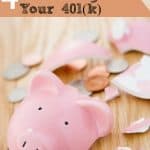 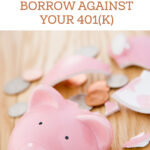 You may think that borrowing against your 401(k) for a down payment on a house is a good idea. You may even think it’s the answer for when an emergency occurs.

But, you’d be wrong. In all honesty, there’s never a good reason to borrow against your 401(k). Let’s take a closer look at why.

You’ll Have to Pay That Money Back with Interest

You may think that borrowing from your 401(k) is the best option. It’s your money and it’s an easy option.

Not necessarily. You will have to pay that money back with interest. In a way, that’s a good thing, but on the other hand, you still have money that you need to pay back. In other words, it’s not as simple as pulling money from the account and moving on.

Something you need to consider if you can’t pay the money back is that you’ll have to pay taxes on the money you withdrew plus an early withdrawal penalty.

Deposits into your 401(k) are tax-free. However, when you withdraw that money, you either need to pay it back or pay taxes on it. The penalty, on top of that tax, is 10% if you are under the age of 59 ½.

If you end up leaving your company (whether voluntarily or not), you have only 60 days to pay back your entire loan or you'll have to pay penalties and taxes on the amount of your loan.

If you were to get laid off, that's not the best time to be worrying about paying back loans or paying extra taxes!

You’re Putting Off Your Retirement

Pulling money from your 401(k) means that you’ll have to work even harder to get the money you need to retire. Not only do you risk not being able to pay the money back, but you'll also miss any growth in the market while it's out of your account.

You want to put the money into your account and not think about it again until it’s time to retire or make changes on how it’s invested. This allows your money to grow.

If you do need more money, consider lowering the amount you contribute to your 401(k) for a certain period of time. However, you want to make sure that you’ll actually bring home more money on your paycheck after taxes (since your contributions are pre-tax).

You also want to make sure you’re still investing as much as your employer will match. Never pass on FREE money.

Your Situation Could Get Worse

Chances are you’re borrowing from your 401(k) because you’re in a bad situation. What are you going to do if things get worse? Then you’ll be stuck with the payments or paying taxes on the amount withdrawn. Do you really want to risk it?

Your 401(k) should always be off limits. You always want to pay yourself first so that your retirement won’t be spent greeting customers at Walmart. Don’t let a temporary situation derail your future plans.