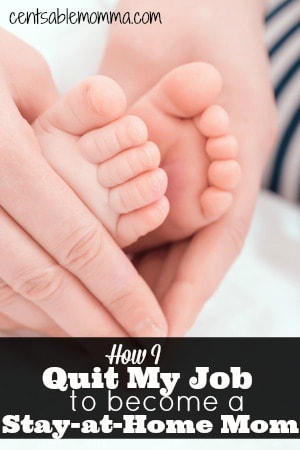 Although having one parent stay at home with the kids is not for everyone, my husband and I decided before we even got married that we wanted to have me stay at home with any future kids for at least a few years.  Because both of our incomes were about the same, it seemed like a daunting task to cut our income in half.

Here are some tips that we used to prepare for living on only one income:

It can be difficult to live on one income and usually involves at least some sacrifice.  However, if it's important to you that one of you is at home with the kids, you need to keep your end goal in the back of your mind to keep on track financially even years before you have kids.

Plan big purchases based on one income:

When we bought our first house, the bank approved us for a mortgage based on both of our incomes.  However, we bought much less house than we were approved for, because we were planning on living there even after we had kids.  We didn't want to have to worry about downsizing when our income was lower, so we bought a house we could afford based on my husband's income only.  Believe me, it was very tempting to look at nicer houses, but we kept our mind on the end goal.  It was so nice to not have to stress about paying the mortgage in later years.

Pay off any debt:

We didn't have much consumer debt, but we did have my student loans from graduate school.  I didn't want to have to worry about making payments once we were living on one income, so I started paying as much as I could towards my student debt so I could pay it off in about three and a half years.

I probably went a little overboard, because I had a spreadsheet where I could plug in how much loan was left, how much I needed to pay, and then when we could have kids.  Needless to say, we got that loan paid off right before I went into labor!

Save as much as you can:

Since we knew we were going to be living on one income, we socked away as much as we could in our emergency fund so we'd have extra money for any expenses that would come up in the next couple of years.  I also maxed out my 401(k) at work during the years that I worked.  I figured even if I wasn't adding any new money for several years, my money could still grow (which is has almost doubled since I quit contributing).

Live on One Income {before you have to}:

While you still have two incomes, try to create your budget based on only one income to make sure that it's realistic.  Use your second income for debt payoff and savings and any extras you might want/need before your income is cut.

We really did intend for me to not work at all when I had my oldest son.  However, once he was born, my employer called me and asked if I would work at home about 10 hours a week until they could find a replacement for me.  Of course I said yes!  The time was flexible, so I woke up early and worked while he was napping.  That temporary assignment lasted for the next 5 years!

Although the income wasn't huge, it was enough for us to have a little extra wiggle room in our budget.  Even if you're at home with the kids, you can look for ways to make some extra money during nap time.

Although there were days when I wanted to tear my hair out being at home all day with my boys, I'm so thankful that we were able to make it work.  There were sacrifices to be sure, but it was worth it for us.  What about you?  How have you made it work?