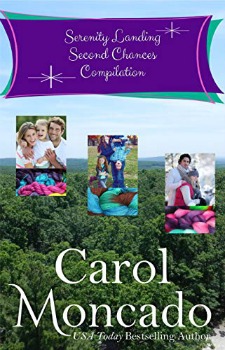 Right now, you can download Serenity Landing Second Chances Compilation (Serenity Landing & Beyond - The Collections Book 3) Kindle book written by Carol Moncado for FREE from Amazon.  I've read all of these books, and I think they're a fun, lighthearted read.

A down-on-her-luck single mom and the heir to an American political dynasty.
A pregnant mom with no place to live and a child television star with a royal brother.
A duchess trying to escape from under her father's tyranny and the Crown Prince who's loved her for years.
Three women in the cottage yarn industry. Three men who don't understand their fascination, but love them anyway.

Jonathan William Langley-Cranston IV has come to terms with the idea that he just might remain single and childless for the rest of his life. It’s not his first choice, but it seems to be what God has for him, at least for now. Until a chance encounter with a familiar face changes his outlook.

MacKenzie Davidson has been a single mom since before her daughter was born. Just once, she’d love not to worry about losing her job or what will happen if her fledgling yarn dyeing business doesn’t take off. A stormy night and flooded road bring the straws that finally break the back of her independent streak.

Her knight-in-shining-SUV comes in the form of American royalty. She’s read enough of the tabloids to know that’s how Jonathan’s family is seen and knows she can’t begin to measure up.

But when he puts everything aside to help her, her daughter, and her now-floundering business, she begins to wonder. Jonathan quickly comes to believe he’s found everything he’s looking for. Will they find their way to each other or will they be ripped apart before discovering home?

Christopher Bayfield enjoys his single life. Unencumbered by relationships, he works and travels whenever he wants. He can even drop everything to do something he's been dreaming of for a while - return to acting in a Happily Ever After TV Network movie. But before he can leave a knock on the door changes his life.

Julia Quisenberry never planned to have one child out of wedlock, much less be pregnant with number two, but this was what her life had become. Unemployed and barely making ends meet with her knitting patterns and teaching, she's almost desperate enough to take a handout from her best friend.

A phone call from Christopher changes Julia's plans. He offers her a job and a lifeline, in more ways than one. So when the paparazzi threaten all he holds dear, she'll do anything to help him out - even marry him. Can they overcome the obstacles in their path to find a glimpse of hope for their own happily ever after?

All of the next generation of royals from the Commonwealth of Belles Montagnes have found love.

Crown Prince William of Mevendia has done an exceptional job of keeping his private life out of the public eye. It’s been half a decade since he was last romantically linked with anyone, and even then, no one actually knew who she was.

Margaretha Delatreaux had once fancied herself in love with a prince. Maybe she still did. Promises broken still cause her heart to ache, and she longs to repair the damage the last words they’d flung at each other had done.

After a chance encounter, a life or death situation, a foreign country, and unflattering press, just maybe they’ll have a second chance at reclaiming hearts.