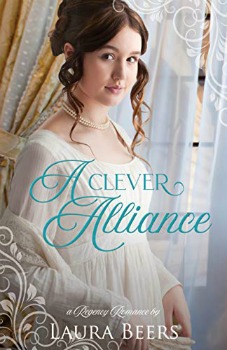 Right now, you can download A Clever Alliance (Regency Brides: A Promise of Love Book 1) Kindle book written by Laura Beers for FREE from Amazon.

Lady Madalene Ramsbury has been summoned home from Miss Bell’s Finishing School to some unfortunate news. In three weeks, she is to be married to a man she’s never met. Rather than face a life she does not want; she flees from her own engagement party and elicits help from a most unlikely source.

Society’s golden boy, Everett, the Marquess of Northampton, was outraged when a young woman suddenly appeared in his curricle. Was she attempting to trap him into an unwanted marriage? It would be just like some overzealous mother to put her up to such a ploy. However, it doesn’t take long for him to discover that Madalene is unlike any woman he has ever known.

With her reputation in shambles, Lady Madalene and Everett hatch a plan to solve both of their problems, a fake engagement. But as they spend time together, they realize more is on the line than just a blossoming friendship. And with danger ever present from her jilted suitor, Everett and Madalene find themselves relying on one another in ways they’d never imagined… but can they trust each other with their hearts?