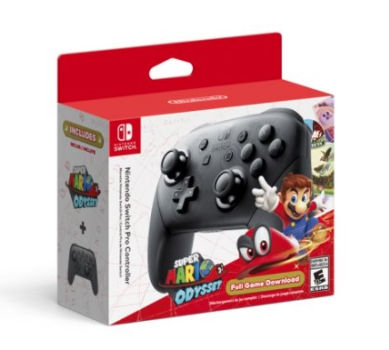 For a limited time, you can buy the Nintendo Switch Pro Controller with Super Mario Odyssey Full Game Download Code for only $69 (price will be shown after you add it to your cart) with FREE in-store pickup from your local Walmart store (where available).

About the Controller and Game:

Nintendo Switch Pro Controller + Super Mario Odyssey Nintendo Switch Pro Controller Kick your game sessions up a notch with the Nintendo Switch Pro Controller. Includes motion controls, HD Rumble feature, built-in amiibo functionality*, and more. Also includes charging cable (USB-C to USB-A). *amiibo sold separately. Visit amiibo.com for details on amiibo functionality. Super Mario Odyssey Explore incredible places far from the Mushroom Kingdom as you join Mario and his ally Cappy on a massive, globe-trotting 3D adventure. Use amazing abilities—like the power to capture and control objects, animals, and enemies—to collect Power Moons so you can power up the Odyssey airship and save Princess Peach from Bowser’s wedding plans! Thanks to heroic, hat-shaped Cappy, Mario’s got moves that’ll make you rethink his traditional run-and-jump gameplay—like cap jump, cap throw, and capture. Use captured cohorts such as enemies, objects, and animals to progress through the game and uncover loads of hidden collectibles. And if you feel like playing with a friend, just pass them a Joy-Con controller! Player 1 controls Mario while Player 2 controls Cappy. This sandbox-style 3D Mario adventure is packed with secrets and surprises, plus exciting new kingdoms to explore.