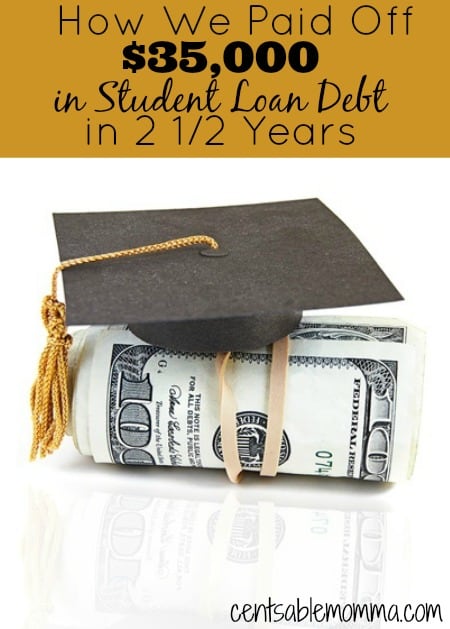 My father always told me not to marry someone who was in debt.  In reality, it was me who brought debt to our marriage.  And it was no small number - $35,000 in student loan debt.

Perhaps in hindsight, I shouldn't have gone to grad school and racked up the student loans.  But, who knew that I would meet my husband shortly after grad school and have my first son several years later.

We wanted me to stay home with any children that we had.  But, that would not be possible with student loan payments.  So, my goal was to pay off my student loans before we had children.  And...we made the last payment about a month after my oldest son was born!  In total, it took us about two and a half years from start to finish to pay them off.

The longer version of the story is that since we wanted to live off just my husband's income in the future, we kept our expenses low using only his salary.  I used my salary to max out my 401(k) and pay off as much as I could on the loan each month.  We took 2 small breaks on paying extra towards the loan to save money for a down payment for our house and then to pay cash for a new roof on that house.

I had a spreadsheet where I calculated exactly how many months were left on the loan and I was constantly calculating how much faster we could pay them off if we added extra money to our regular payment.  I really wanted to start our family, and I had it calculated down to the month when we could have a baby.

So what about you?

Perhaps you don't have two incomes where you can use one of the incomes almost completely to pay off debt like we did.  However, I believe that if we didn't have such focus and a goal for paying off the debt by a certain time that it wouldn't have happened as quickly.

If you really want to do something, you'll do what you can to make it happen - whether it's getting a second (or third) job to earn extra money or cutting your expenses to the bare bones to have extra money to pay towards your debt.

Set a goal for your payoff date and use a debt calculator or a spreadsheet (if you're a nerd like me) to see the effects of paying extra money towards your debt each and every month to see the difference it makes.  And then discipline yourself to actually do it.  Motivate yourself by writing it down on an index card and posting it prominently (like maybe your bathroom mirror) to remind yourself.

What about you?  Have you paid off a large debt?  How did you do it?

207shares
« Which Debt Should You Pay Off First?
4 Easy Ways to Repair Your Credit Score »