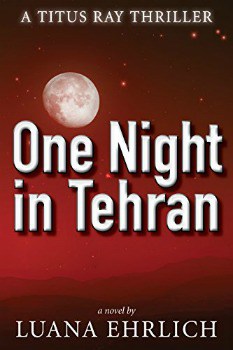 Right now, you can download One Night in Tehran: A Titus Ray Thriller Kindle book written by Luana Ehrlich for FREE from Amazon.

CIA operative Titus Ray is searching for answers.
Meanwhile, an assassin is searching for him.
Learning the truth . . .
Veteran CIA officer Titus Ray--on the run from the Iranian secret police--finds shelter with a group of Iranian Christians in Tehran. While urging Titus to become a believer in Jesus Christ, they manage to smuggle him out of Iran to freedom in Turkey.

Dealing with the past . . .
Returning to the States, he discovers his Iranian mission failed because of political infighting within the Agency. In a hot-tempered outburst, he delivers a scathing indictment against the Deputy Director of Operations, and, as a result, the deputy forces Titus to take a year's medical leave in Oklahoma.

Facing the future . . .
Before leaving Langley, Titus learns he's been targeted by a Hezbollah assassin hired by the Iranians. Now, while trying to figure out what it means to be a follower of Christ, he must decide if the Iranian couple he meets in Norman, Oklahoma has ties to the man who's trying to kill him, and if Nikki Saxon, a local detective with an intriguing past, can be trusted with his secrets.

· Can a man trained to lie and deceive live a life of faith?

· Should he trust the beautiful young detective with his secrets?

· Was the bullet that killed his friend meant for him?

Please note: Kindle prices tend to change quickly, so be sure to check that the total still says $0.00 before you "purchase" it.