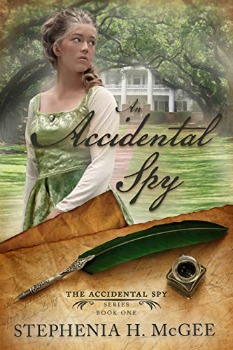 Some secrets change the world...

Once a privileged heiress, Annabelle Ross is now struggling to hold her home and her life together through the devastation of the War Between the States. But with a forced marriage and a desolate future on the horizon, her hopes are beginning to dwindle. When she discovers an encrypted note on a dying soldier, she seizes the opportunity to use it to deliver a message of her own. Instead, she’s mistaken for a spy and captured. Now her only chance to escape is the handsome soldier in charge of discovering her secrets.

After his brother is captured by enemy soldiers, Matthew Daniels vows to rescue him at any cost. When a secret society offers him a chance for retribution, Matthew must decide between his loyalties and his convictions. To prove himself, he’ll have to first unmask the spirited spy holding the key to their plans or risk losing his brother forever.