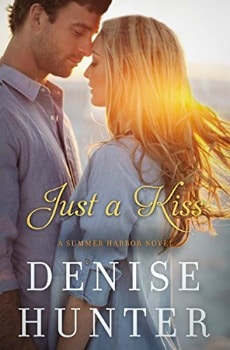 For a limited time, you can buy Just a Kiss (A Summer Harbor Novel) Kindle book written by Denise Hunter for only $1.99 (85% off) from Amazon.

Riley Callahan’s plans to reveal his secret feelings for his best friend are ruined when his life is drastically altered in Afghanistan.

Watching the love of his life falling for his brother was enough to send Riley straight to boot camp. But over a year later, he’s officially a marine, and Beau and Paige are no longer an item. When Riley’s tour in Afghanistan is up, he intends to confess his feelings to Paige and win his best friend’s heart once and for all.

But all that changes when an IED takes the life of a comrade and leaves Riley an amputee. Now he’s heading home, injured and troubled. His plans to win Paige are a distant dream. She deserves so much more than the man that’s left. All he can do now is put some healthy distance between them. But upon his return he discovers his family has arranged for him to stay with Paige.

Paige is a nurturer at heart and happy to take care of her best buddy. By all appearances he’s adjusting miraculously well to his disability. But as the days pass, Paige begins to see that the smiles and laughter are just a mask for the pain he’s hiding. He has nightmares and mood swings, and his unwavering independence keeps him from accepting help from anyone, including her. To make matters worse, her job is in serious jeopardy. The animal shelter that she’s poured her heart into has lost its funding, and she has three months to come up the money needed to save it.

As the weeks wear on with the two in such close proximity, Paige’s feelings for Riley begin to shift into unchartered territory. Why is she suddenly noticing his corded arm muscles and the way his lips curl at the corners? Will she be able to deny her feelings for another Callahan brother? And will Riley let his heart heal so he can let Paige in?

Previous Post: « 20 of the Best Picnic Foods
Next Post: How Much Money Should You Save For Retirement? »