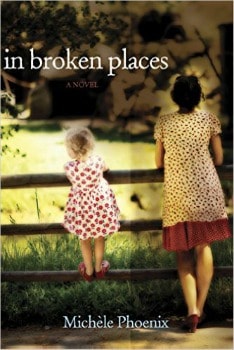 For a limited time, you can buy In Broken Places Kindle book written by Michèle Phoenix for only $0.99 (92% off) from Amazon.

Shelby’s life isn’t glamorous, but it is predictable—and that’s the way she likes it. A survivor of her father’s violence, she has spent a lifetime creating a safe existence devoid of dependence. But her carefully managed world begins to break when, under staggering circumstances, she becomes a single mother to four-year-old Shayla. In a drastic attempt to escape her childhood’s influence, Shelby moves to Germany, but she quickly discovers how intimately linked memory and healing are—and how honestly she must scrutinize her past in order to aspire to a richer future. As she juggles a new job, a new culture, a new daughter, and the attention of an enterprising man, Shelby’s fresh start becomes a quest for the courage to be not only a survivor, but someone who prevails.

Please note: Kindle prices tend to change quickly, so be sure to check that the total still says $0.99 before you "purchase" it.